Dr. Melissa Graham Hansen is the former principal flutist of the Midland-Odessa Symphony & Chorale and the West Texas Winds.

Known for her unique sound palette, Melissa enjoys performing both orchestral and chamber music. The former has led her to perform with numerous orchestras, such as the Greeley Philharmonic, Fort Collins Symphony, Lubbock Symphony, and the River Oaks Chamber Orchestra (Houston). The latter has inspired projects with work towards building albums featuring both flute and guitar music as well as original music written by her father.

Melissa has served as a faculty member at the University of Texas of the Permian Basin and Odessa College (amongst additional institutions in other areas). She intensely enjoys teaching musicology courses in a classroom setting as well as private collegiate lessons.

Beyond this work, Melissa has taught private students of all ages since 1998. One of the unique aspects of her flute studio is the use of her own method book series, entitled Beyond the Page; praised as an “innovative” and “holistic” approach to learning the flute, these books are designed with a series of levels applicable to students ranging from the intrinsically motivated junior high school student to college and beyond. The next book in the series will be aimed at a professional audience and will seek to provide a streamlined source for honing fundamental skills.

After joining the MOSC as the principal flutist in 2012, Melissa also served as an orchestra representative on the MOSC Board (2013-2014) and as an MOSC personnel manager (2014 to 2021). During the summer of 2016 (through the summer of 2019), Melissa left the Basin to start a family. She treasures every moment with her husband and their two children. Melissa resigned all MOSC positions in June of 2021 to pursue and refine her passion for pedagogy, writing, and other independent and collaborative skills.

Melissa received her Doctor of Musical Arts degree (specializing in performance and pedagogy) from the University of Colorado at Boulder, where she studied with Christina Jennings. In addition to Ms. Jennings, Melissa has studied with Pamela Endsley and Peter Lloyd, amongst others in the States as well as in Scotland and England. 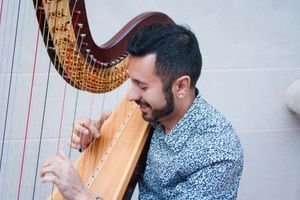 Vincent Pierce is adjunct instructor of harp at the University of Texas of the Permian Basin and at Odessa College, and principal harpist of the Midland-Odessa Symphony and Chorale. Vincent is the former harp instructor for the Ector County Independent School District in Odessa, Texas, where he taught class harp at Odessa HS, Ector MS and Milam Fine Arts Magnet Elementary. He is currently pursuing a Doctor of Musical Arts degree at the Butler School of Music at the University of Texas at Austin.

A native of El Paso, Texas, Vincent holds a degree in Music Education with emphasis in clarinet from Baylor University. He began harp studies as a sophomore at Baylor, and continued at the University of Texas, where he received a Master of Music performance degree, studying with Delaine Leonard.

Vincent has performed in several countries – first in China in 2012 as a member of the Austin based band The Noise Revival Orchestra, and in 2014 throughout Asia and and Europe as a member of the University of Texas Wind Ensemble on their world tour, under the direction of Jerry Junkin. He has also been an official South by Southwest artist, performed with the Dallas Winds, and marched in the 2013 Presidential Inaugural Parade. In the summer of 2008, he studied with Jeanne Chalifoux in Alexandria, Virginia, and in the summer of 2018, Vincent studied with Metropolitan Opera principal harpist Emmanuel Ceysson at the Académie Internationale d’Été de Nice in the south of France.

He is past-resident and a founding member of the West Texas Harp Society, a chapter of the American Harp Society, Inc. While serving as president of the WTHS he brought several guest artists to Odessa, including Russian harpist Sasha Boldachev and past AHS Concert Artist Abigail Kent, through grants from Odessa Arts and the AHS. Vincent collaborated with Odessa Arts on several projects, including the Second Tuesday Salon concert series and an NEA Big Read project, ‘Artpocalypse’. He has served as a Texas Music Educator’s Association All-State harp judge and sectional coach, and has been a clinician at the TMEA convention and the American Harp Society conference in Redlands, California. Vincent is also a registered Suzuki harp teacher and a member of the Suzuki Association of the Americas.

Vincent performs actively throughout the state of Texas, performing regularly with Midland Festival Ballet, Permian Basin Opera, and El Paso Symphony, and he has performed with Lubbock Symphony Orchestra, Abilene Philharmonic and Corpus Christi Ballet. He has recently begun composing, and has studied composition with Donald Grantham and Yevgeniy Sharlat at UT Austin.