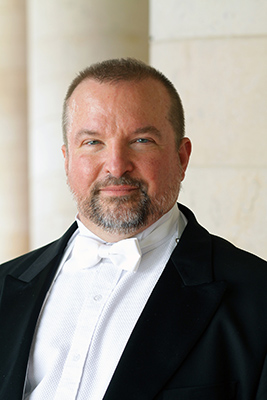 Gregory M. Pysh serves as Minister of Music at the First Presbyterian Church of Midland, where he conducts the adult and handbell choirs for the 1200-member congregation. The First Presbyterian Sanctuary Choir has presented works ranging from the Ninth Symphony of Beethoven to the Sacred Concert of Duke Ellington, and has sung in Edinburgh’s St. Giles Cathedral, Canterbury Cathedral, and New York’s Carnegie Hall. Previous to Midland, he served churches in Tennessee and Ohio.

Pysh is also conductor and music director for Musica Sacra, a professional chorus, and serves at Book Review Editor for the Choral Journal, the professional publication of the American Choral Directors Association.  In June 2016, he was a Scholar-in-Residence at the Antonio Vivaldi Institute in Venice, Italy, studying the sacred choral works of the Baroque master.

Under his baton since 2010, the Chorale made their first European tour in June 2014, singing concerts in Austria and Germany, including St. Stephen’s Cathedral in Vienna. In addition, the Chorale toured Italy in June 2016, which included singing for high mass at St. Peter’s Basilica in Vatican City.

His choral and handbell compositions appear in the catalogues of various publishers, and he has received the ASCAP PLUS Excellence Award each year since 1994. His writings on the choral art have appeared on the pages of the Choral Journal, Choristers Guild Letters, ACDA Student Times, and The American Spirit.

He is married to the former Kathy Baldwin, and they have two children, Danya and Matthew.