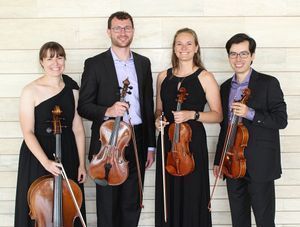 Described by the Odessa American as “a precise and authoritative sound” the Permian Basin String Quartet (PBSQ) is the resident quartet of the Midland-Odessa Symphony & Chorale and is comprised of the principal string players of the orchestra. The quartet members have developed a loyal audience and a reputation as a leading ensemble in the Permian Basin. The PBSQ has made recent appearances in Midland, Odessa, Abilene, Alpine, San Angelo, Big Spring, Lubbock, and Hobbs, NM. In 2015, the PBSQ was the featured guest artist on the Abilene Christian University (ACU) Tour as the soloists on Short Stories by Joel Puckett as well as gave the Texas premiers of several works by ACU visiting composer Hyunjoo Lee. In 2013 the PBSQ appeared in the Abilene Philharmonic Nocturne series as well as the Church of the Heavenly Rest Chamber series. The PBSQ frequently appears with the San Angelo State University Choir, has given masterclasses in Mexico and Lubbock, TX as well as appeared with Chamber Music Amarillo. In addition to performance, the PBSQ is very dedicated to music education. The PBSQ gives educational concerts at elementary schools in the Permian Basin throughout the year. In addition, the PBSQ serves as section coaches for several high school orchestras in the Permian Basin as well as the University of Texas-Permian Basin (UTPB) University Orchestra. The PBSQ has also partnered with UTPB as the faculty for the All-Region Summer Workshop as well as the Hartwick College Summer Festival in Oneonta, NY. Members of the PBSQ are on faculty at UTPB, ACU, Midland College and Odessa College as well as maintain private studios.

For more information about the quartet, educational programs, and schedule, please visit their Facebook Page

Help support the Permian Basin String Quartet by becoming a “Friend”. For just $25 you will assist with the purchase of concert music, guest artists and other expenses.