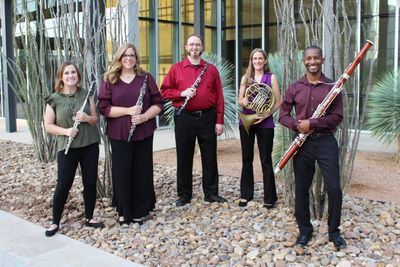 As the resident woodwind quintet of the Midland-Odessa Symphony & Chorale, the West Texas Winds are active throughout the year presenting audiences young and old with performances full of energy and refinement.

The ensemble has a significant repertoire of classic standard woodwind quintets and groundbreaking new music, having presented both U.S. and world-premiere performances by living composers from around the globe. Performing two full-scale recitals a year as well as educational concerts, informal luncheon recitals at the ClayDesta atrium, and other public and private engagements in the area, the West Texas Winds are always working to present something new and exciting to their listeners.

In addition to live performance, the West Texas Winds have begun presenting regular educational programs through live internet broadcast to Midland Montessori School, and have embarked on a YouTube project entitled “From the Archives,” presenting recordings of the group's past recitals accompanied by commentary and discussion from the current members of the ensemble.

From avant-garde to timeless classics, from the concert hall to YouTube - a West Texas Winds performance is like no other.

Help support the West Texas Winds by becoming a “Friend”. For just $25 you will assist with the purchase of concert music, guest artists and other expenses.