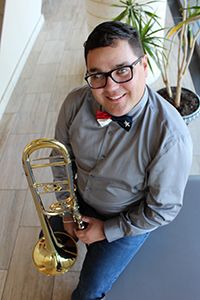 Mr. Elizondo was appointed Principal Trombone with the Midland-Odessa Symphony & Chorale in March 2019.  He is also a member of the Lone Star Brass.

Mr. Elizondo has been a guest musician with The New World Symphony, American Brass Quintet, and The World Famous Glenn Miller Jazz Band.

A native of San Antonio TX, John Elizondo earned a bachelor of music in 2013 at The New England Conservatory and graduated with a Masters of Music Degree in 2015 from The Juilliard School. John is an alumni of The Aspen Music Festival and The Music Academy of The West.