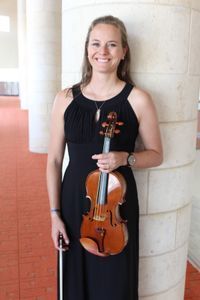 Violinist Sarah Elizabeth Cranor is passionate about the freedom of sonic possibilities found in both historical and contemporary music. She is acting Concertmaster / Principal Second Violin with the Midland-Odessa Symphony, a member of the Permian Basin String Quartet and the Chasqui Quartet, and performs with baroque ensembles across the greater Midwest region. Sarah directs Tonos del Sur: a historically-informed ensemble which explores the intersection of European music with the colonization of the Americas, whose aim is to bring music of lesser-known, anonymous, and indigenous composers, and music in indigenous languages to today’s audiences.

Recently released recordings include “The Colorful Telemann” with Indianapolis Baroque Orchestra for NAXOS Music, “Fair and Princely Branches: Music for the Jacobean Princes” with Renaissance violin band The Queen’s Rebels, “Stay at Home for the Holidays” with Sphere Ensemble, and the world premiere of Kurt Vonnegut’s Requiem with Voces Novae.

Sarah holds a Doctor of Music degree from Indiana University’s Jacobs School of Music. Her doctoral research focuses on the music of Santiago Billoni, chapelmaster at the Durango Cathedral, Mexico, from 1749-1756. While at IU, she studied with Stanley Ritchie, Grigory Kalinovsky, and Mimi Zweig.

Sarah has presented guest lectures at Universidad Nacional Autónoma de México and at Indiana University, and she teaches violin students both locally and across the world, including in Colombia and Kenya. She performs regularly with her husband, violinist Alejandro Gómez Guillén both in string quartets and as Duo Anthracite, with a mix of repertoire for two treble instruments from Jean-Marie Leclair to Sven-David Sandström.

Sarah has fallen in love with long-distance running, after running several solo marathons during the pandemic. She is currently training for her next ultra-marathon race and is looking forward to seeing where her running shoes take her!